Less of more of the same

Estimated reading time: 08 minutes and a half.

August/2015 - The EF 24-70mm f/4L IS USM announced in 2013 is an unusual lens on Canon’s lineup. It’s doesn’t substitute nor complete any aperture family, but introduces a portable, light zoom with a macro function. At 70mm you can mechanically drive the inner barrel a few mm longer, reducing the minimum focusing distance from 38cm to 20cm. Other brands use the same idea but it’s the first time we see it on a genuine EF lens, arriving on the L lineup. 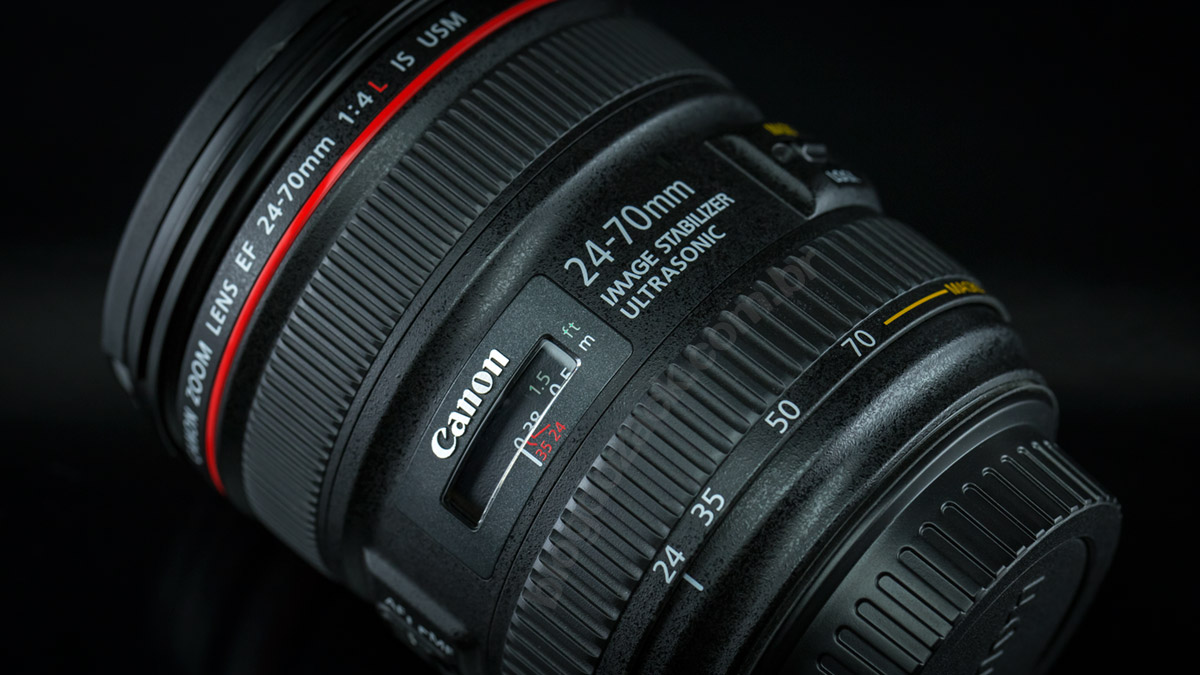 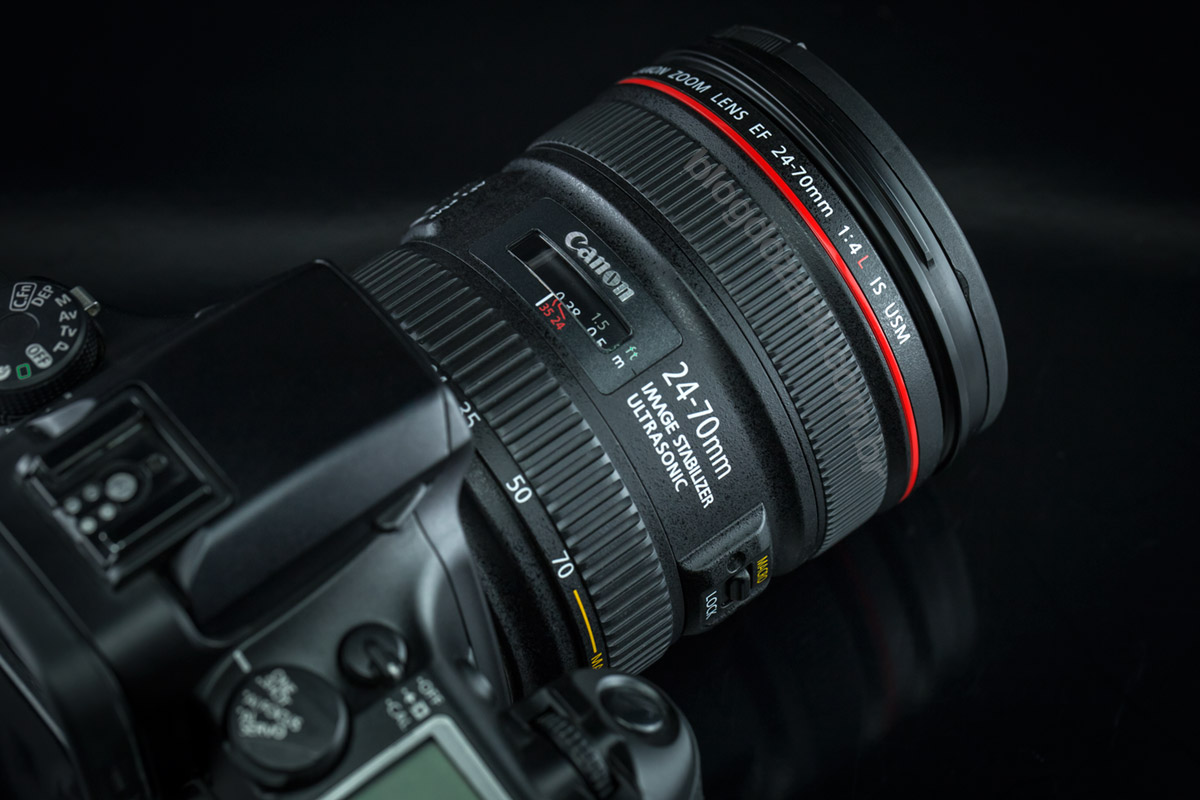 In your hands the size and weight is a pleasure to use with lighter bodies, like the EOS 6D made for travellers and street photographers. But the smaller lens comes with disadvantages: the rear zoom ring is playing with the boundaries of comfort, and sits so close to the camera that both hands are in each others way. The right hand that grips the body is in the way of the left hand that supports the lens. It’s just too cramped. Canon should’ve put the buttons and distance window together at the rear, and rings at the front like the EF 24-105mm f/3.5-5.6 IS STM. 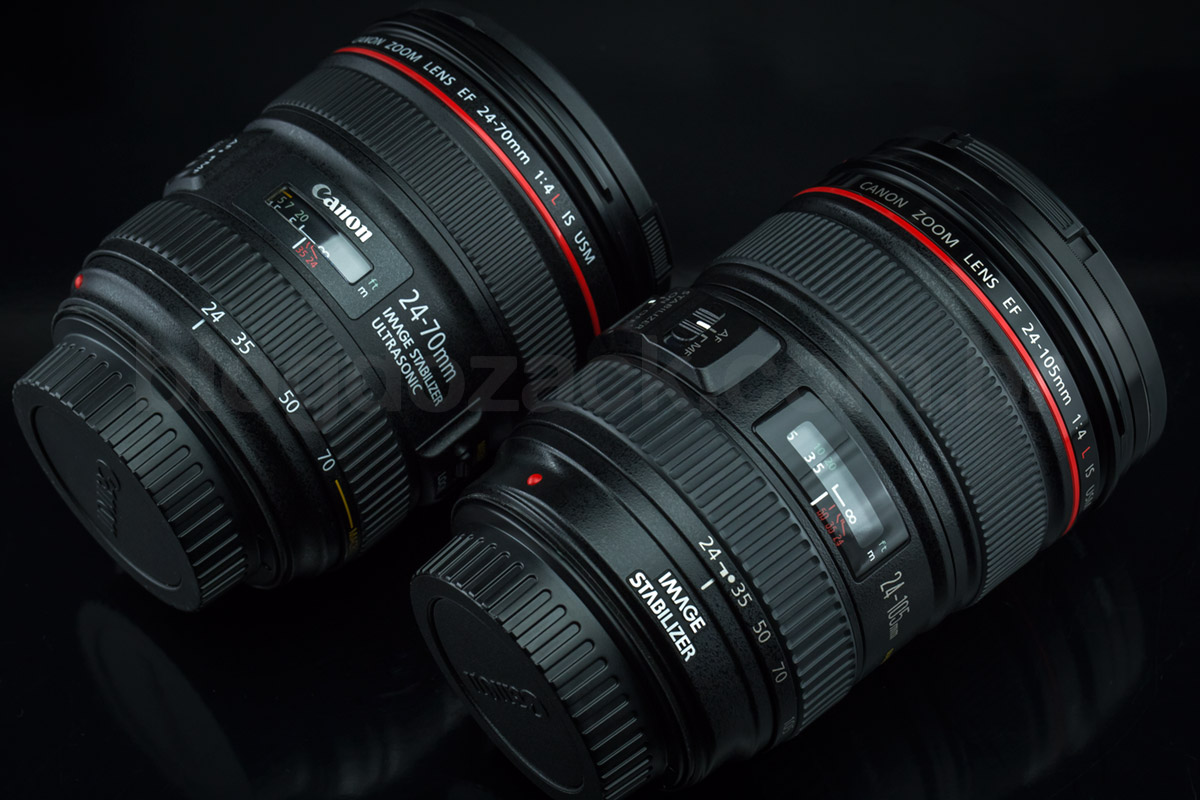 At least its usability is genuine L, with perfectly damped rings and no zoom creep. The zoom ring does follow the gravity: point the camera down and it gets lighter, as the inner barrel moves from 24mm to 70mm. And the focusing ring is light and smooth, not being loose. It was made with macro photography in mind, so it’s precise with zero play. It works just perfectly. 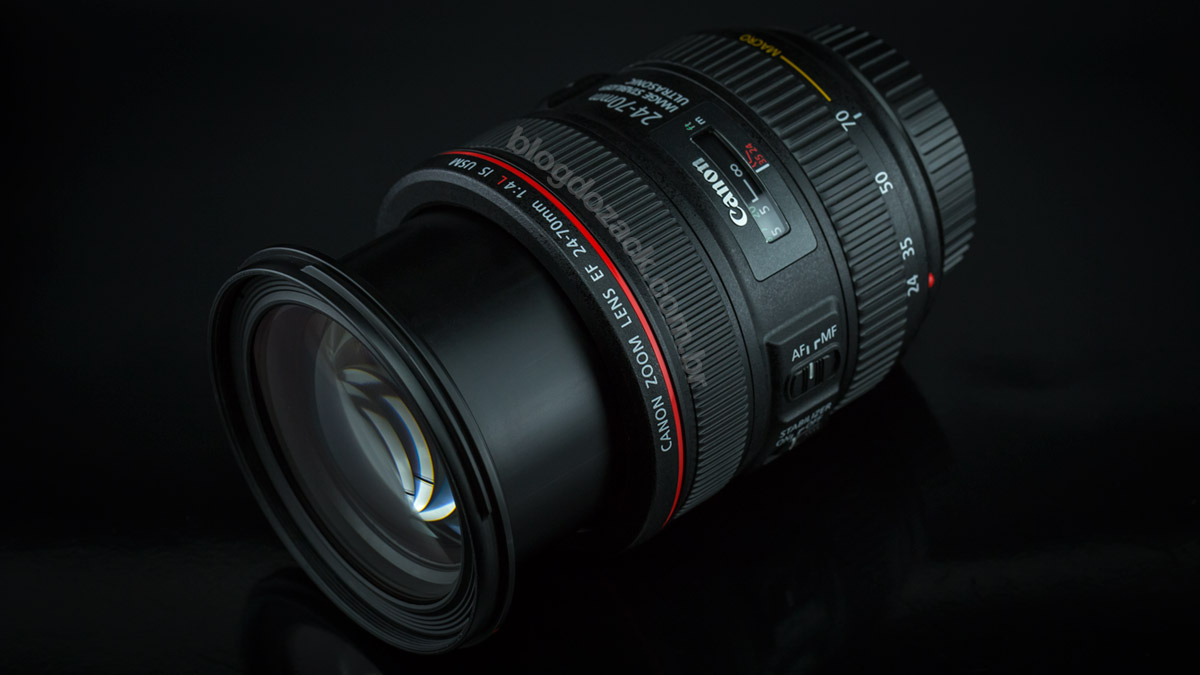 Inside its headlines are the Canon USM AF and the hybrid IS, for the first time in a zoom lens. Not much to say about the AF: every time you read “Canon USM AF”, think fast, silent and precise. No photo came out of focus and it locked at the blink of an eye, under plenty of light. Even when I pushed the EOS 6D center phase AF point to its limit on candle lit portrait, the camera took about two seconds but locked anyway. It’s Canon, it’s USM, it’s fast, point and shoot. Completely reliable!

The hybrid IS, introduced in 2009 on the EF 100mm f/2.8L IS USM, promises to compensate not only angular movements but also linear hand movements. Nop, the IS module doesn’t spin on its own axis. The novelty is an extra shift sensor that adds data to an improved IS algorithm, up to four stops. It’s not “5 axis” like Sony’s and Olympus that also measure roll. Built-in the lens and designed for its own focal length makes for a very effective compensation. 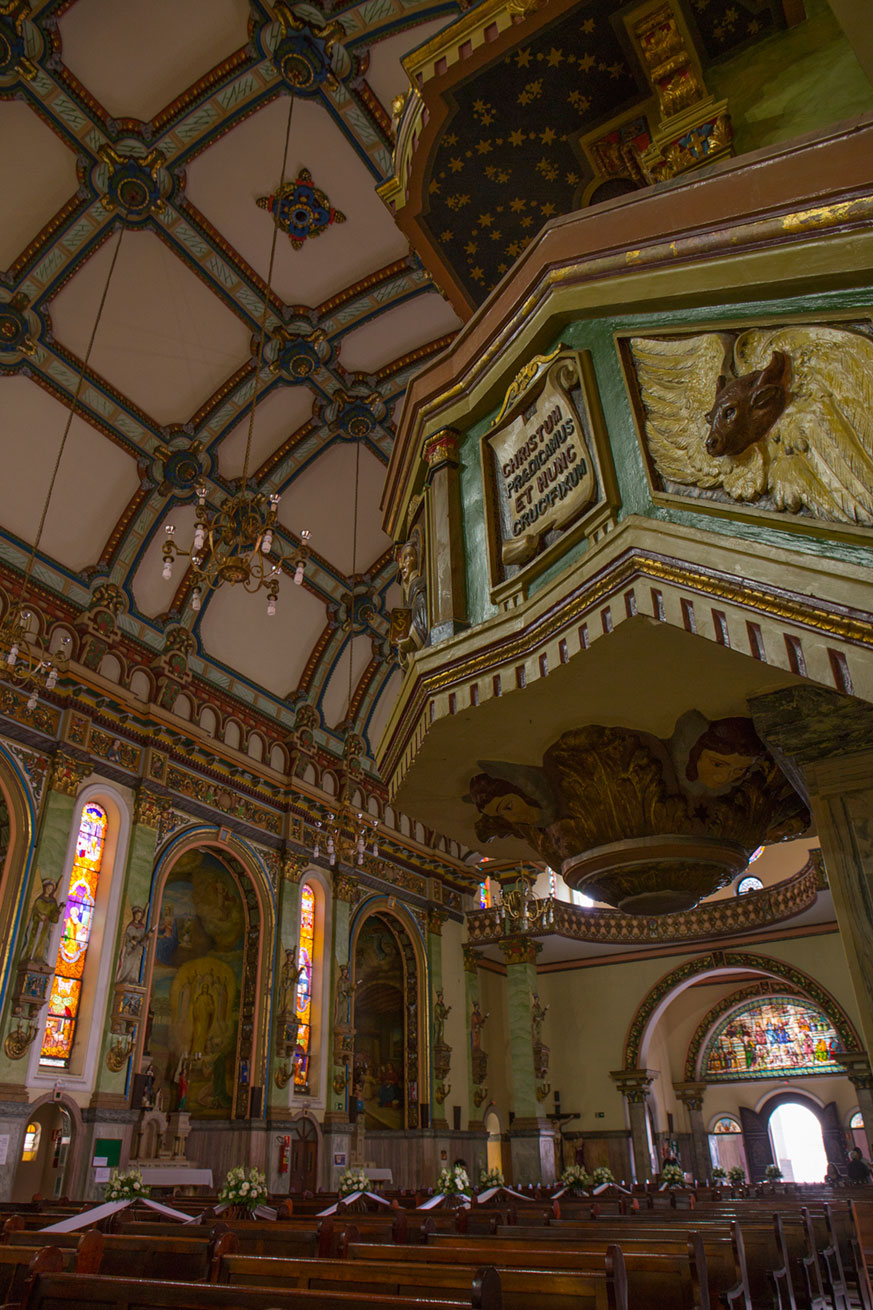 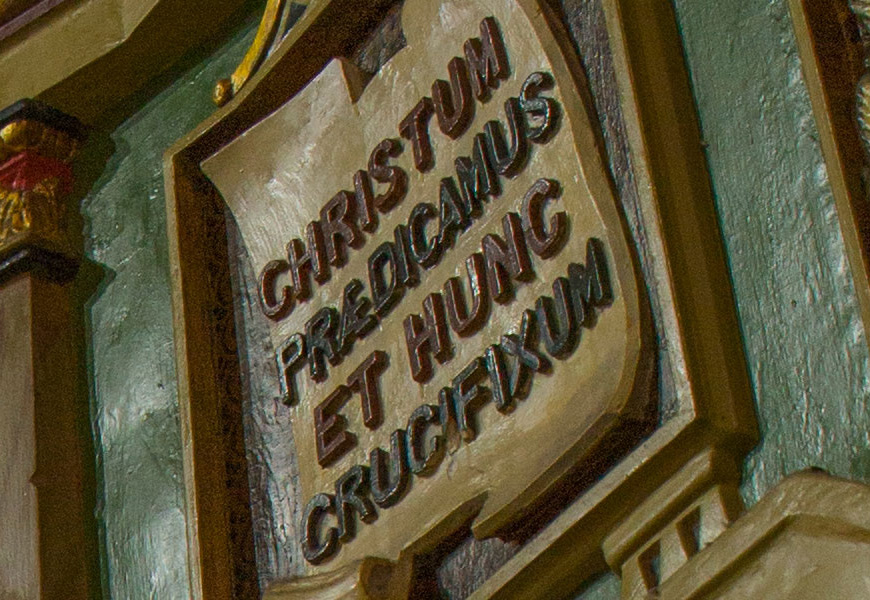 In reality what you get is an extremely effective stabilisation no matter the focusing distance, and it should be included on all lenses as it’s as simple as an extra sensor. It’s also well implemented, practically silent and smooth while in action. It’s an advantage over the EF 24-105mm f/4L IS USM from 2005 rated at just three stops, without the shift sensor. It’s a welcome addition for video shooters: the lens is shorter and the IS is great. Canon is aiming at the video market. 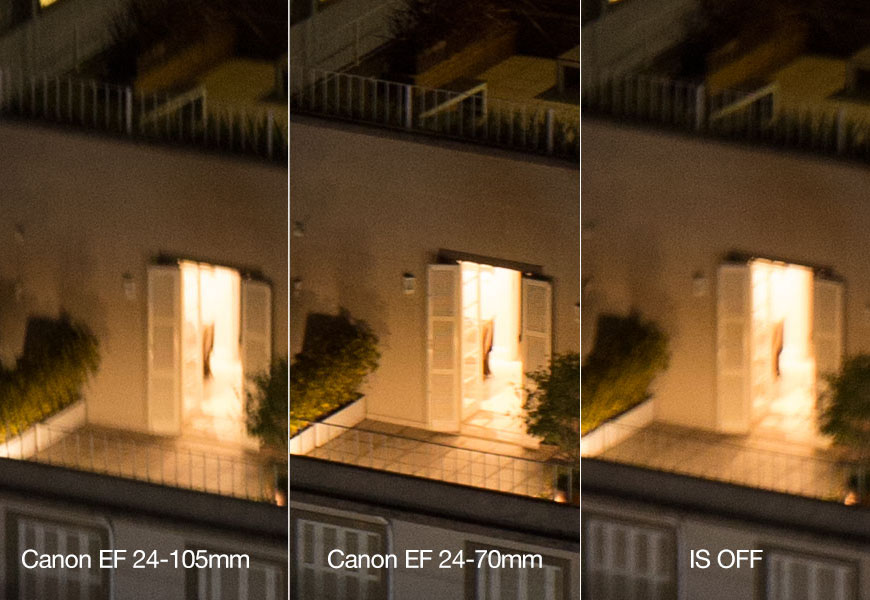 The macro mode is activated by a switch on the right side, that also serves as a LOCK button at 24mm (to avoid zoom creep). Using the right hand you can easily push the switch to the MACRO position using your middle finger, never letting your hands off the camera. The zoom ring rolls past the 70mm position and we get a variable macro mode, as the focal length changes. Some older cameras even register a 80mm distance on the picture EXIF. 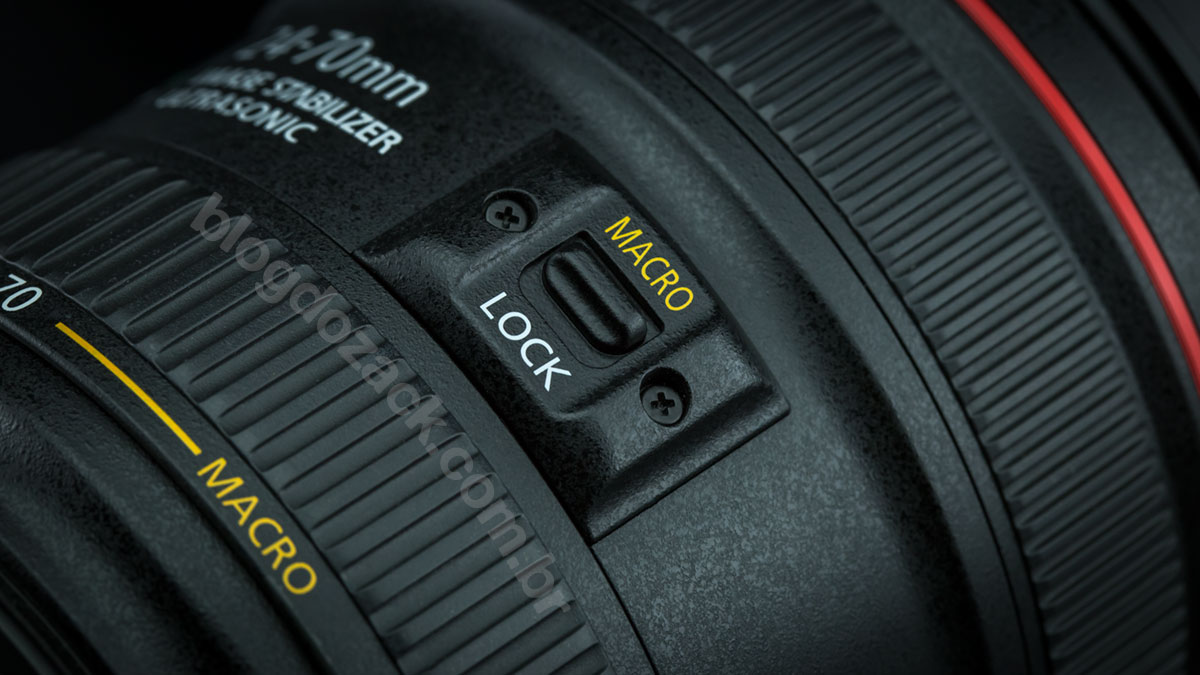 But once again we get a badly implemented “macro zoom”. With the lens completely extended (12.4cm), the MFD drops from 38cm to 20cm. Considering Canon’s flange distance of 4.4cm, we’re left with just 3cm to position and light the subject. And it’s too close! The EF 100mm f/2.8L IS USM Macro features a MFD of 30cm and we’re left with 14.6cm to work between the lens and the subject, which is bit more adequate at 1:1. So it’s cumbersome to work with the zoom. 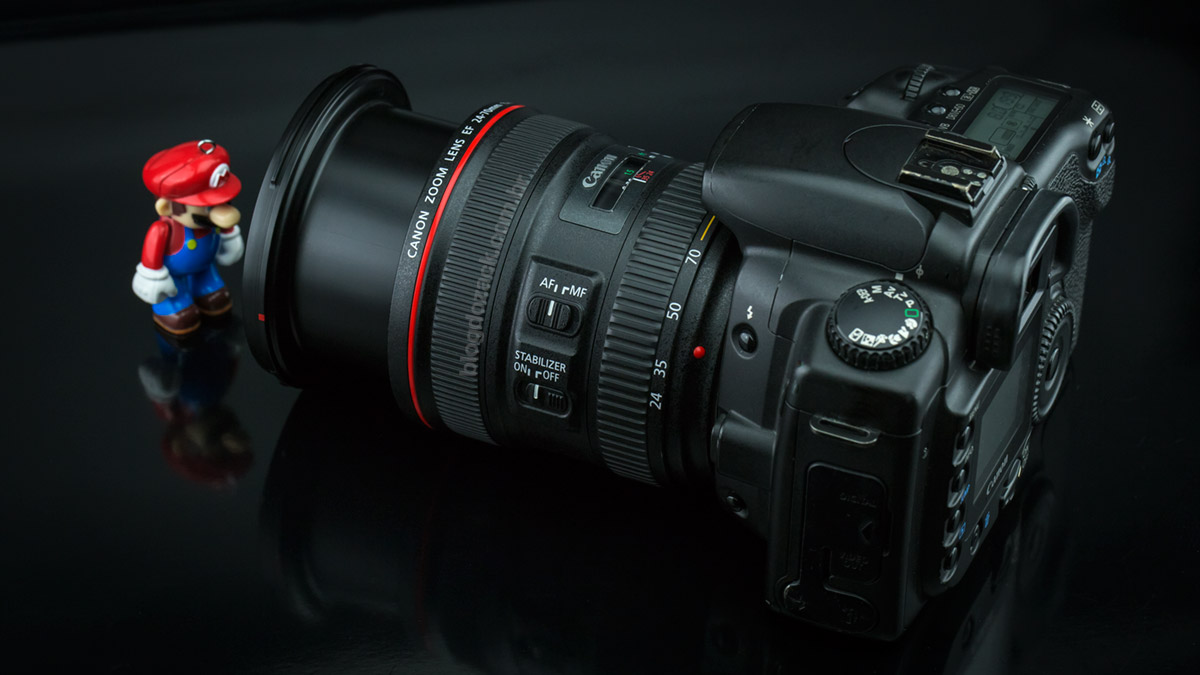 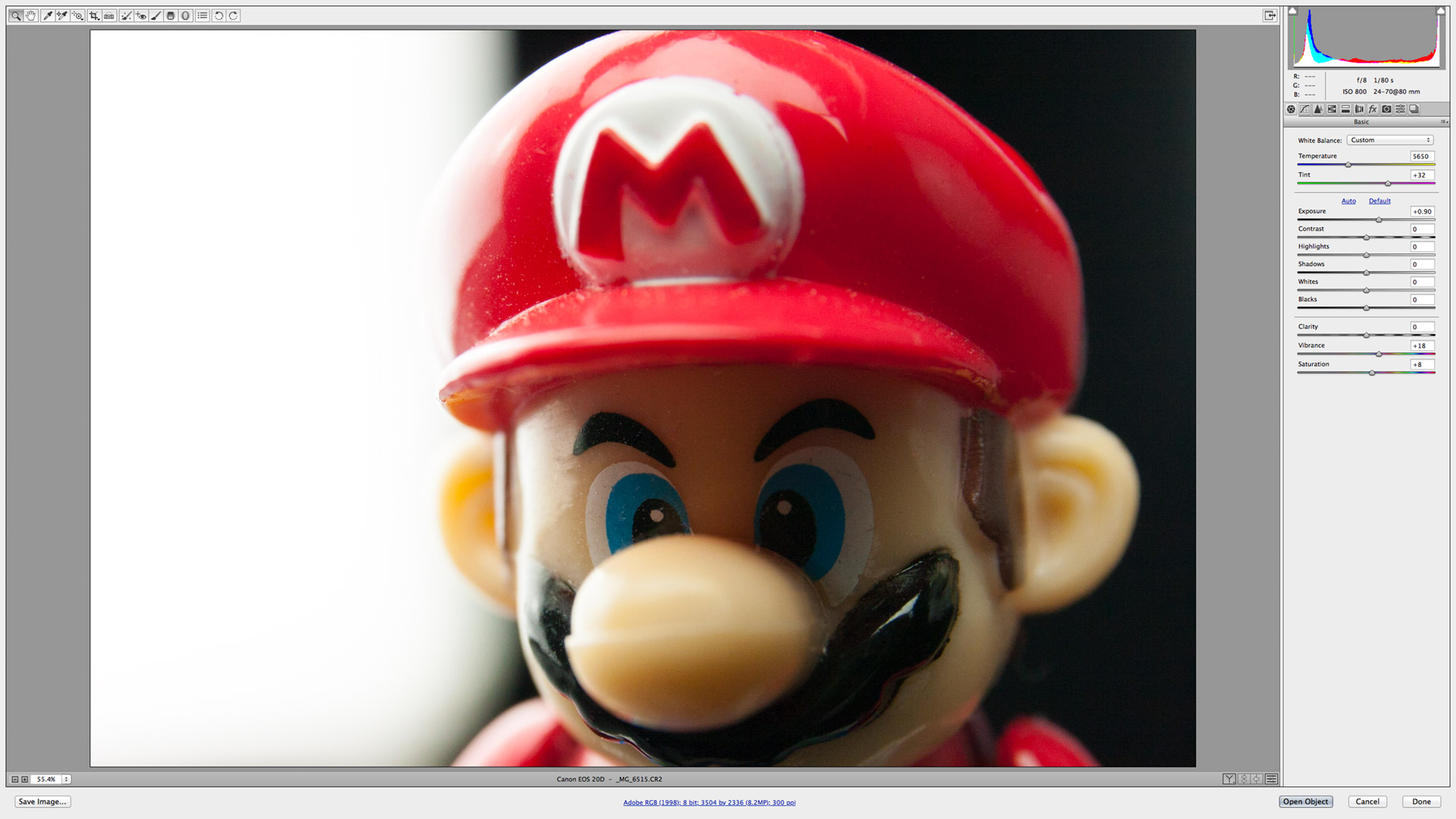 And the result: the EXIF show 80mm and we can see how hard is to illuminate the subject. 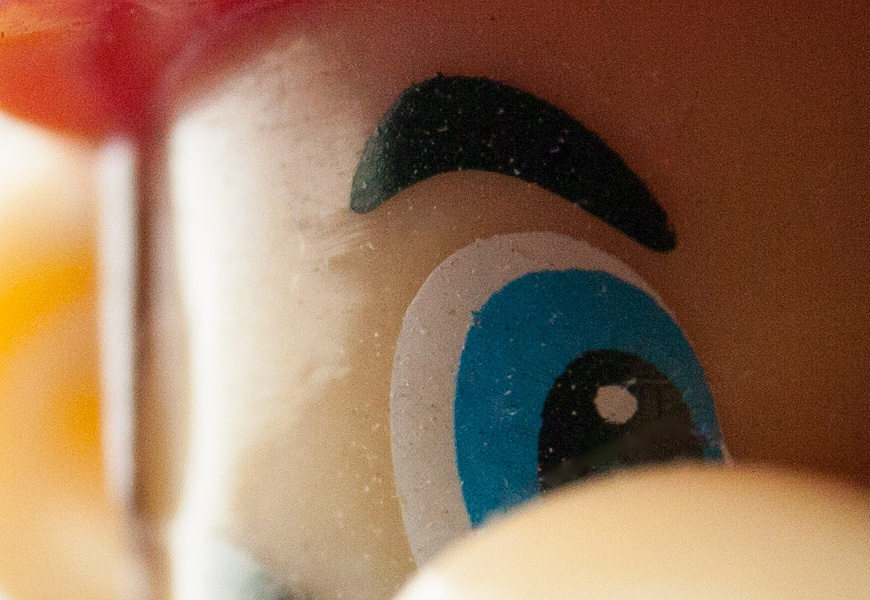 The maximum magnification is 0.7x, not 1:1 like a real macro lens. But it’s more than double most zoom lens. You loose some stops of light, typical of macro work, and the IS also suffers from that. And the worst part is that you loose the infinity focusing, very annoying. Overall it’s a nice feature to have instead of carrying a dedicated macro lens. But even Canon considers it a secondary addition as there’s no “Macro” tag on the lens spec. It’s a welcomed feature, but not a selling point. 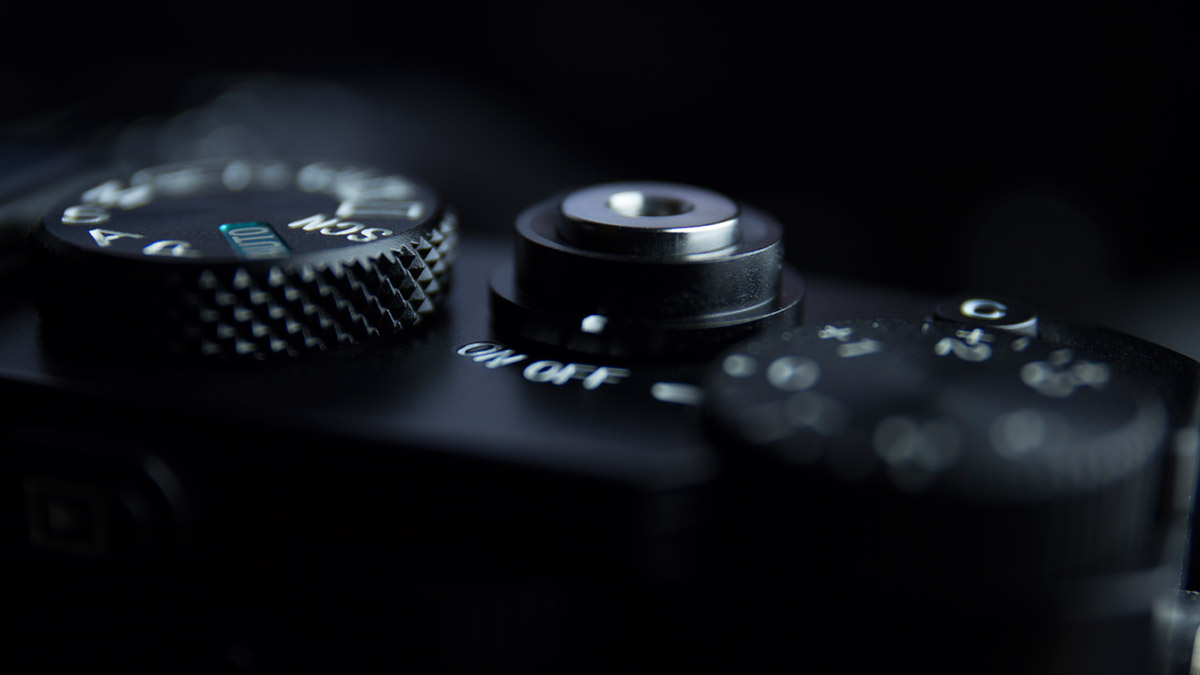 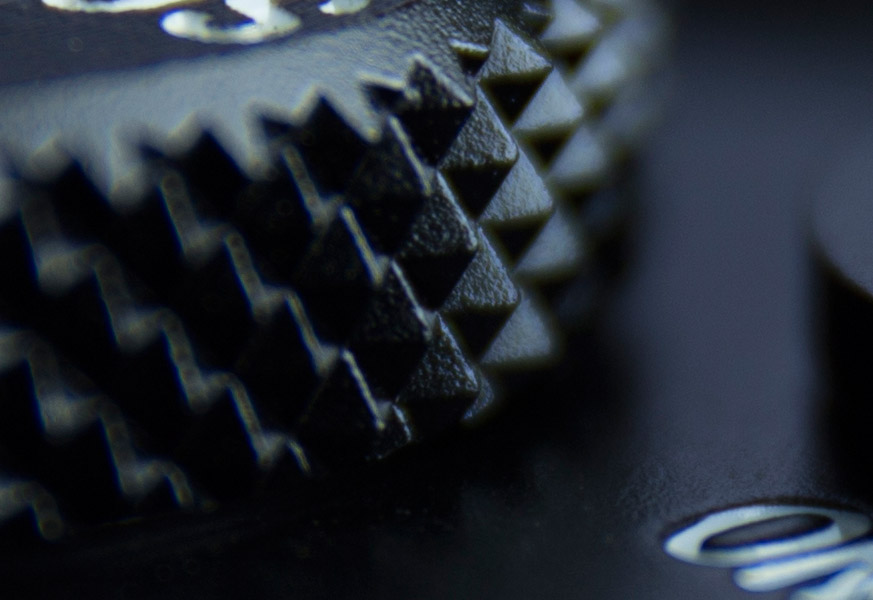 100% crop, it’s not a perfect macro, but it works depending on the output.

On top sits the distance window with meters and feet markings, but no macro ratio. At the front the ø77mm filters are broadly compatible with other L lenses like the EF 70-200mm f/2.8L or EF 24-105mm f/4, seamlessly fitting in your kit. The first and last glass elements are coated with fluorine (not to confuse with Fluorite) to make it easier to clean. And the included lens hood is the new type, with a spring loaded button release. It’s textured to avoid scratches. 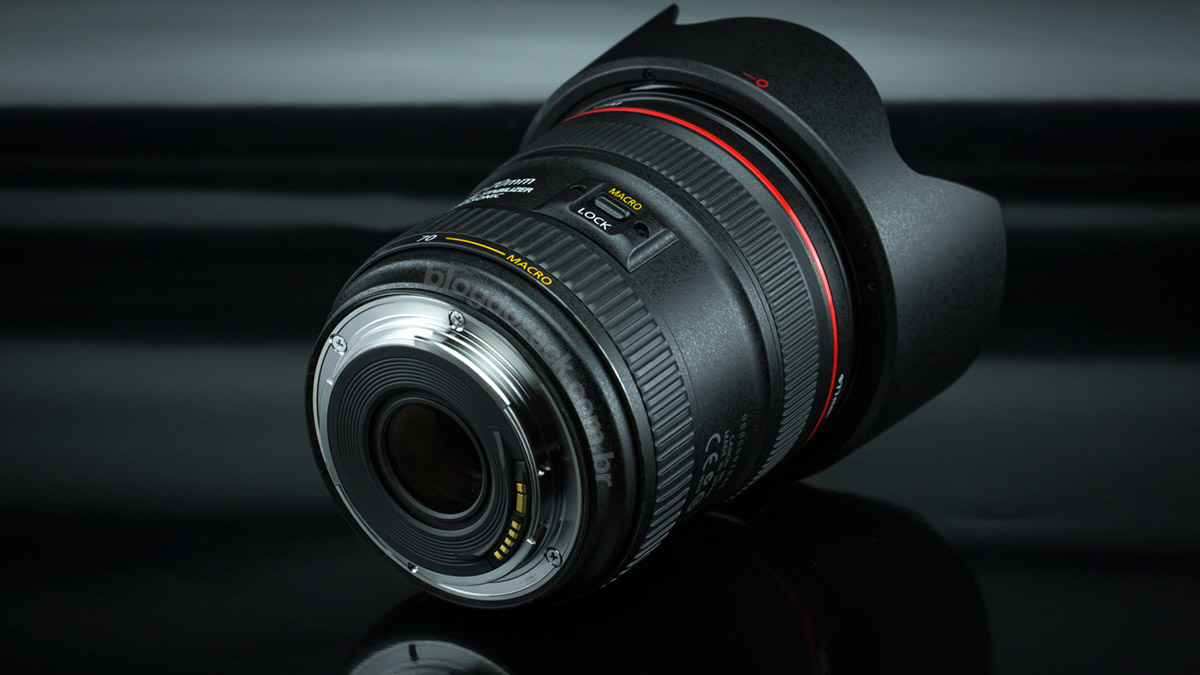 Overall it’s a modern project, in trend with newer L series like the 24-70mm f/2.8L II USM with a plastic exterior and metal inner parts. Nothing wobbles and it was built to last. It’s not a “wow” product but it just works. It’s worth the size, ease of use, added macro, top of the line IS and Canon’s reliability credentials. Well done! 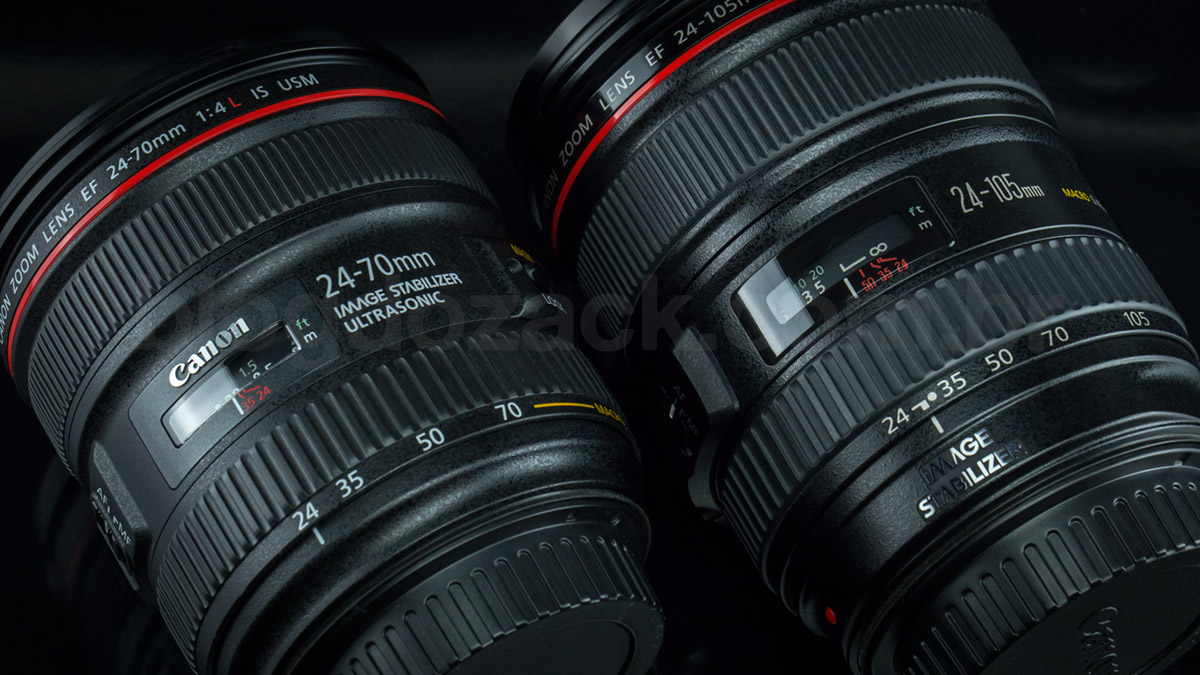 The 24-70mm f/4L IS USM doesn’t substitute the EF 24-105mm f/4L IS USM because their ranges are completely different, and the purchase decision must come from the focal length. If you need the 105mm to tightly frame your subject, or use the shallow depth of field of the short telephoto to isolate the subject, no other feature will drive you to buy a 70mm lens. But there’s eight years between them and for sure the new lens brings recent technologies to the table, albeit not better. 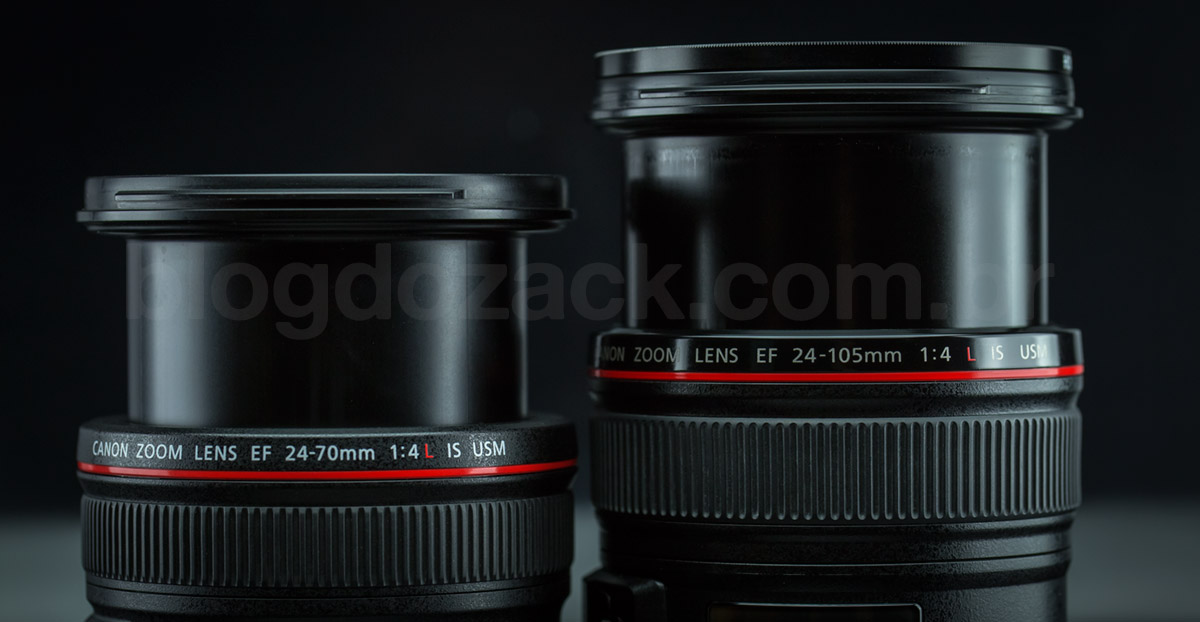 The 24-105mm f/4L IS USM is larger and heavier at 106x83mm and 670g, which sounds bad. But the 105mm fits an extra 7mm at the rear where the “IMAGE STABILIZER” logo sits, pushing the whole layout to the front making the usability feels way less crowded. It’s a stupid 7mm difference that means the world to large handed users, as the ring sits farther from the photographers face. 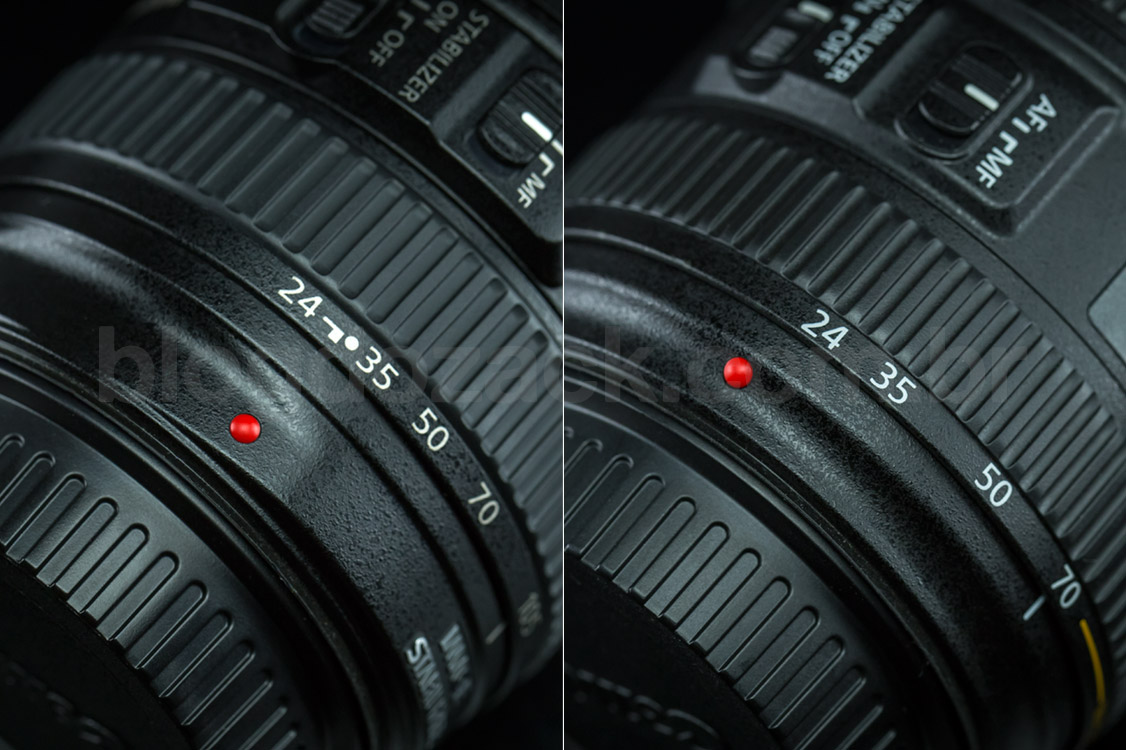 The 24-105mm finishing is shinier than newer lenses. They’re all plastic on the outside, resilient, and won’t dent nor bend at impact. The distance window is discreet on the 24-70mm, and the typeface changed to squareish letters. Near the red L ring the finishing is also matte. 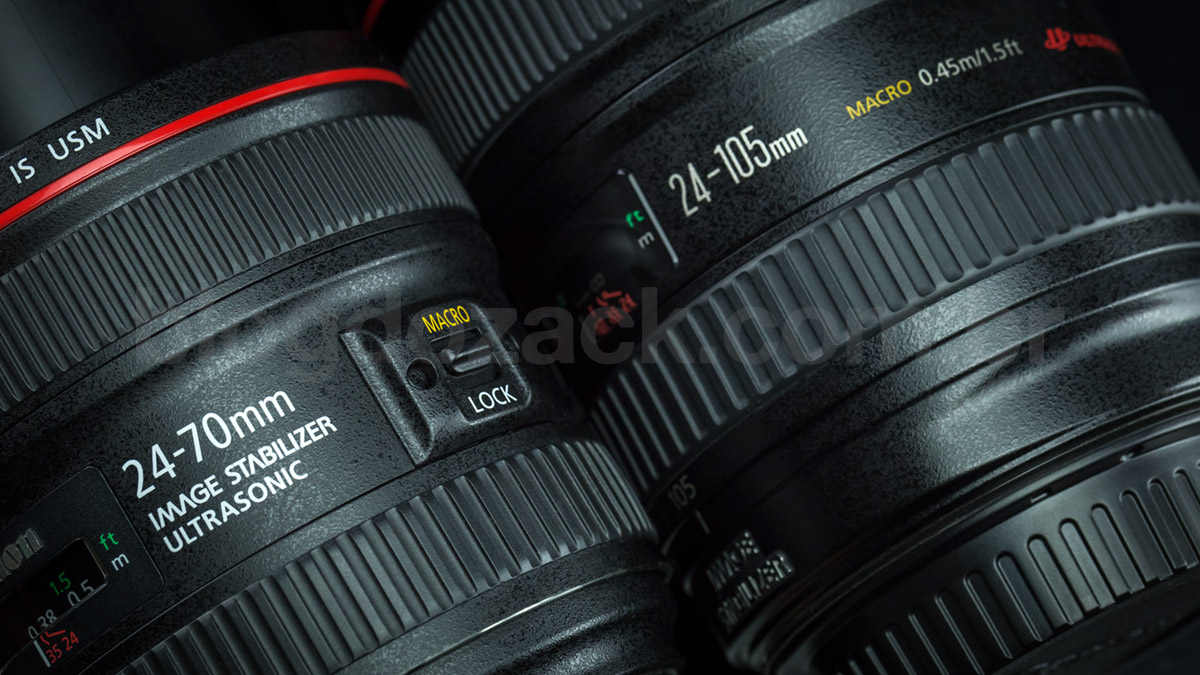 It’s hard to tell the differences inside. But some say since the EF 70-200mm f/2.8L II IS USM (2010), Canon’s engineering got an overhaul and advanced to larger, nylon bearings that are less prone to wear, and electric brushes instead of flat cables. I’ve never had a single fault on an EF lens since 2004, so I can’t really comment about problems. my purchased in 2010 EF 24-105mm feels brand new! So if carefully stored and used, theses lenses are made for a lifetime. 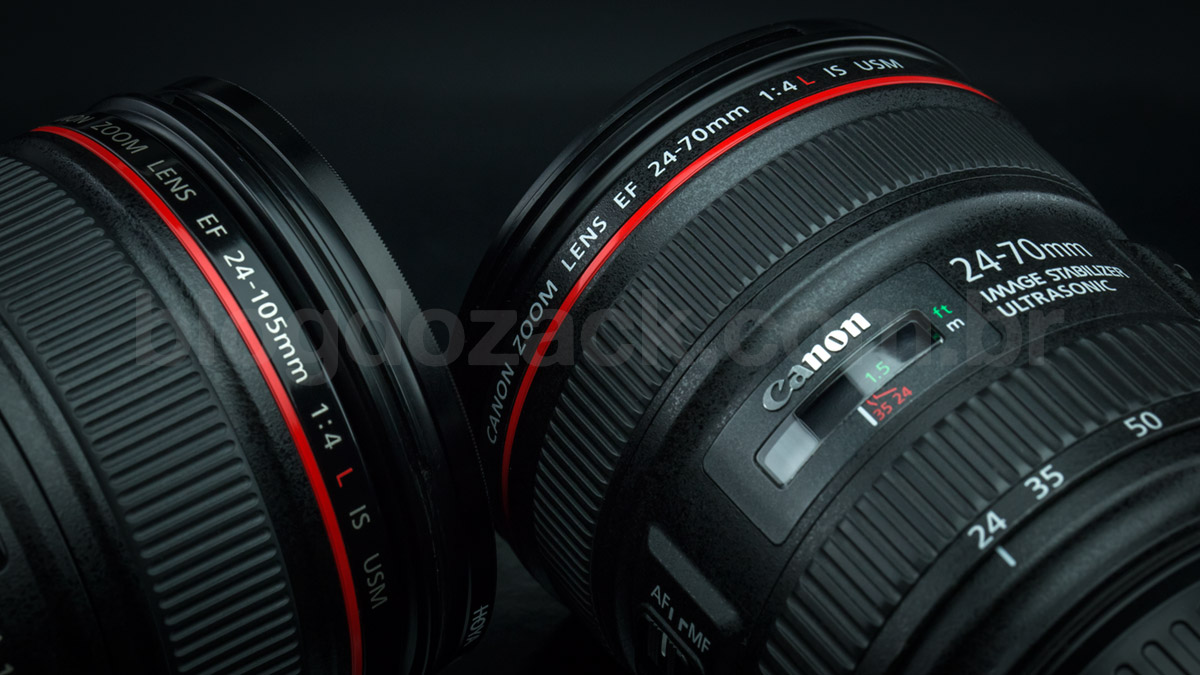 IMHO the 24-70mm biggest advantage is the 4-stops IS module with the hybrid algorithm. It does hold the frame for longer and is ahead of the 24-105mm, besides this lens not being particularly bad at it. But there’s a clear 1 stop advantage and if I had to choose between both the 24-105mm and 24-70mm f/4s to mount on an EOS C300 and shoot run-and-gun docs, I would take the newer lens. The extra 105mm focal length I can deal with few steps closer. 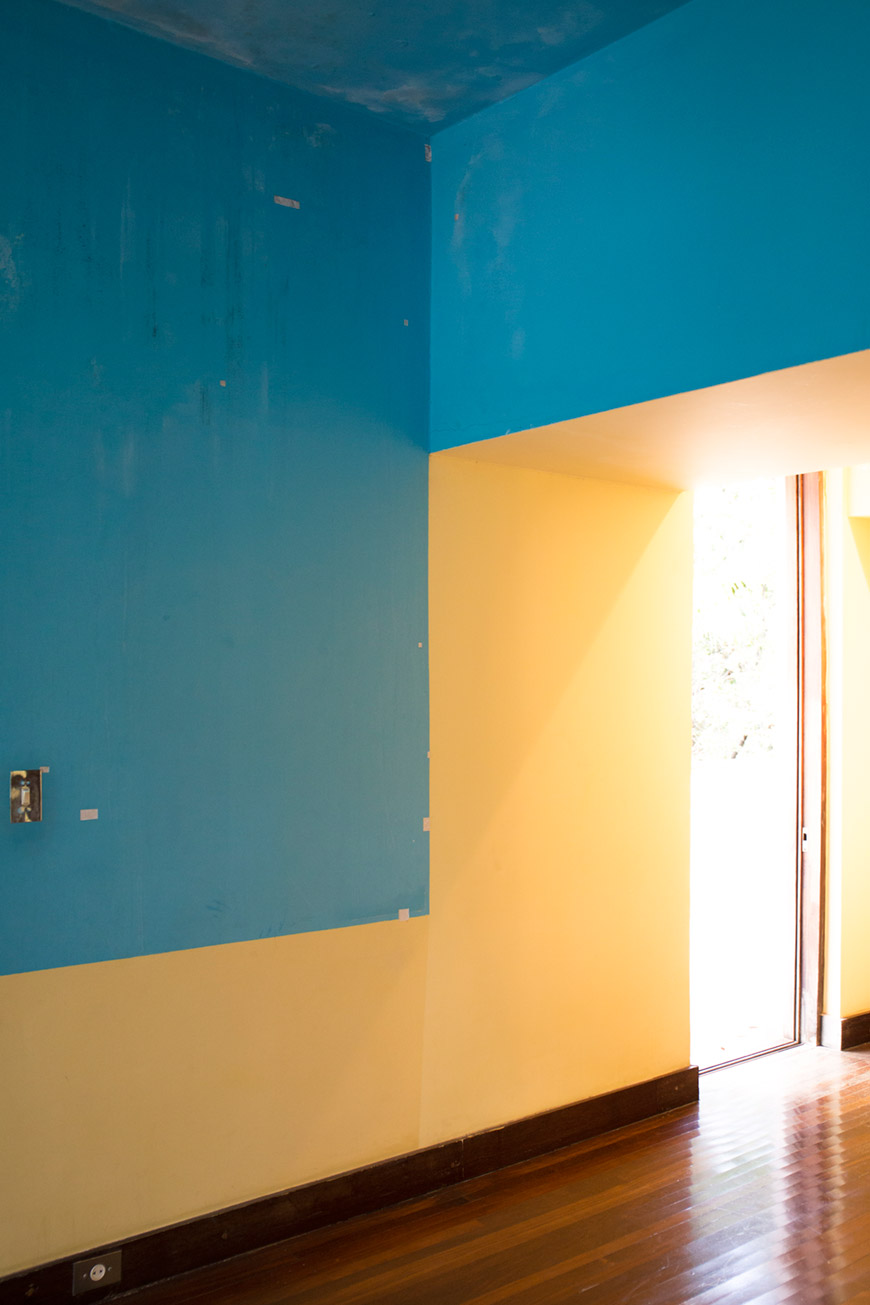 With a 15 elements in 12 groups optical formula, 02 UD and 02 Super UD, plus 02 asphericals, Canon did its homework on the EF 24-70mm f/4L IS USM to deliver near flawless files. A shorter range than the EF 24-105mm and smaller aperture than the 24-70mm f/2.8? The outcome is obvious: less 24mm distortion,  the same overall high resolution, and similar aberration control. 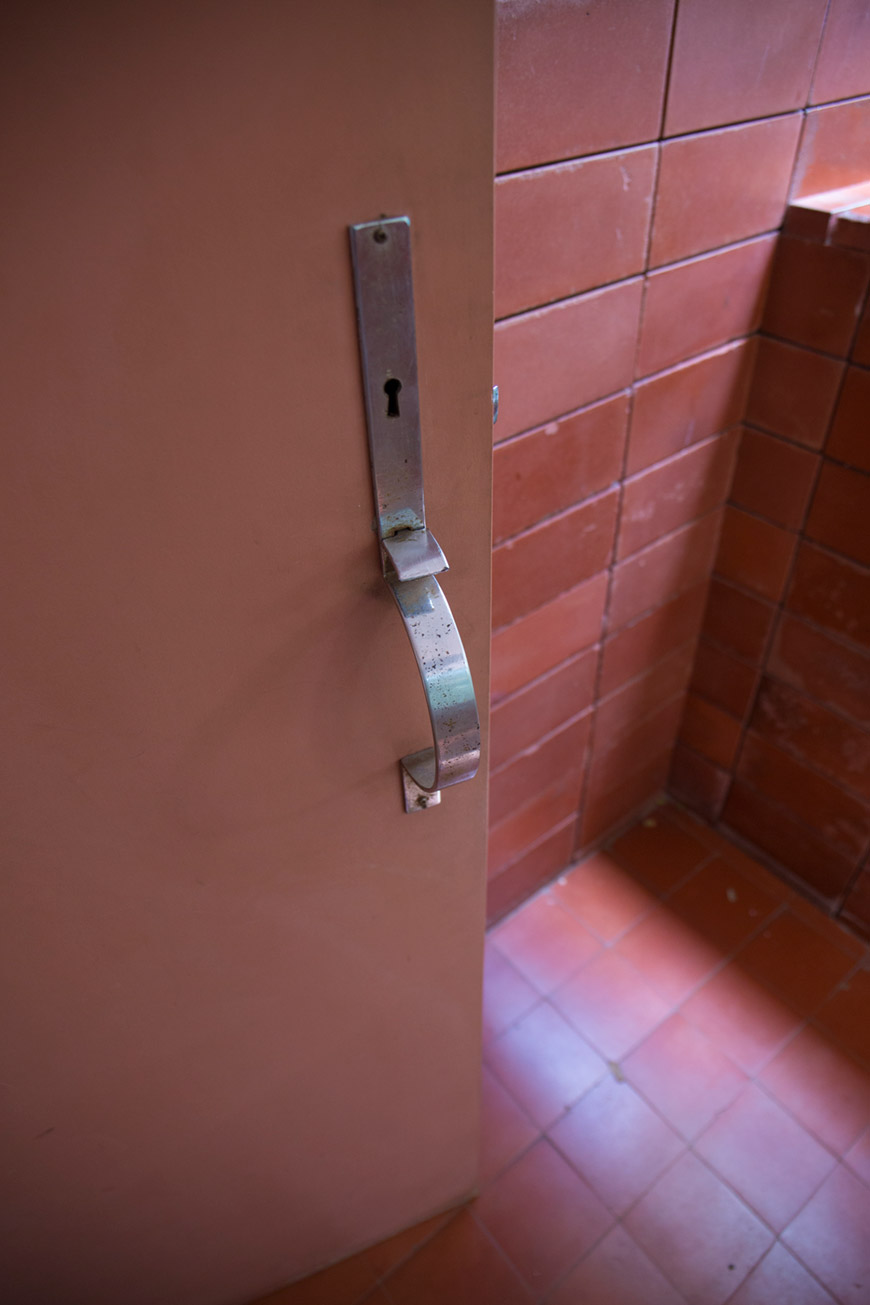 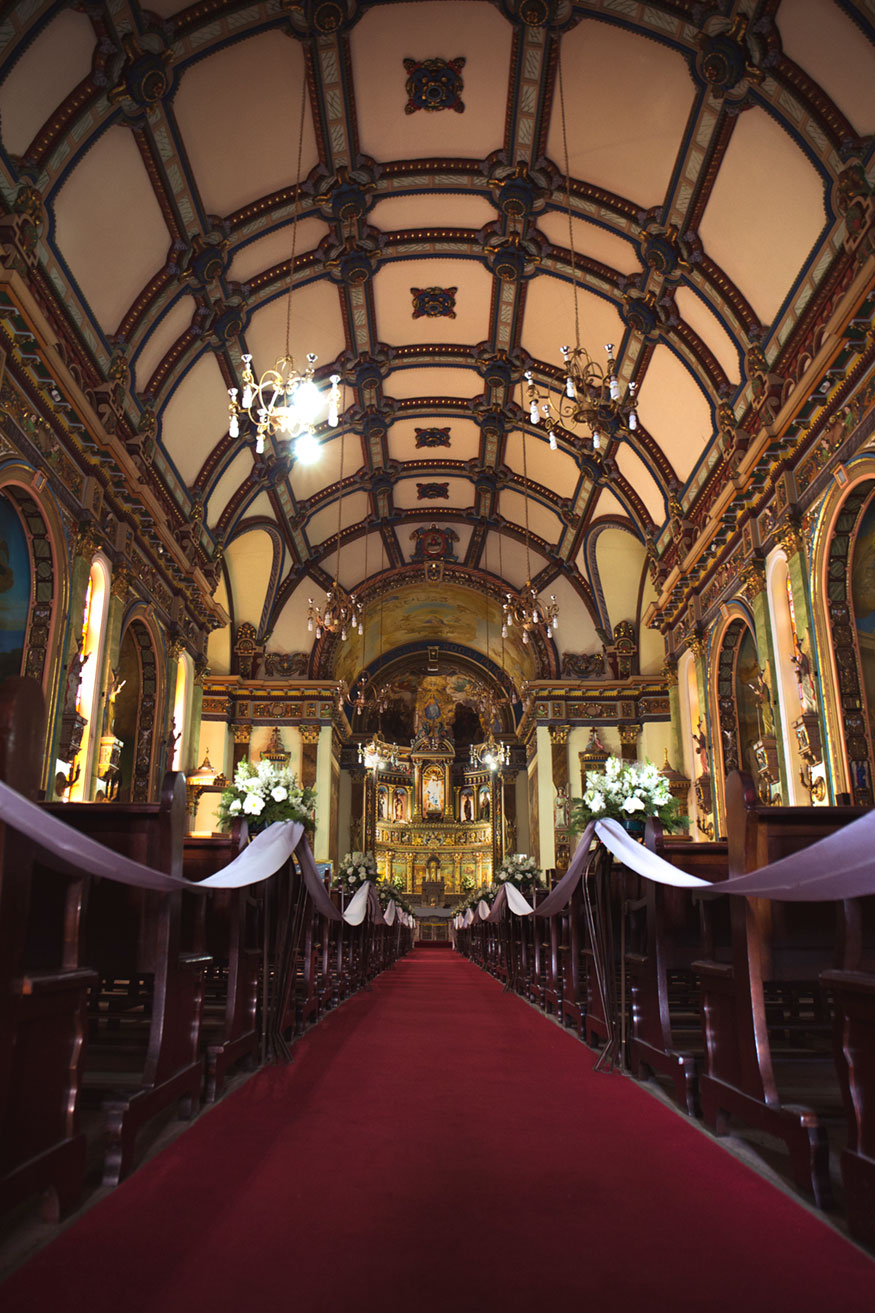 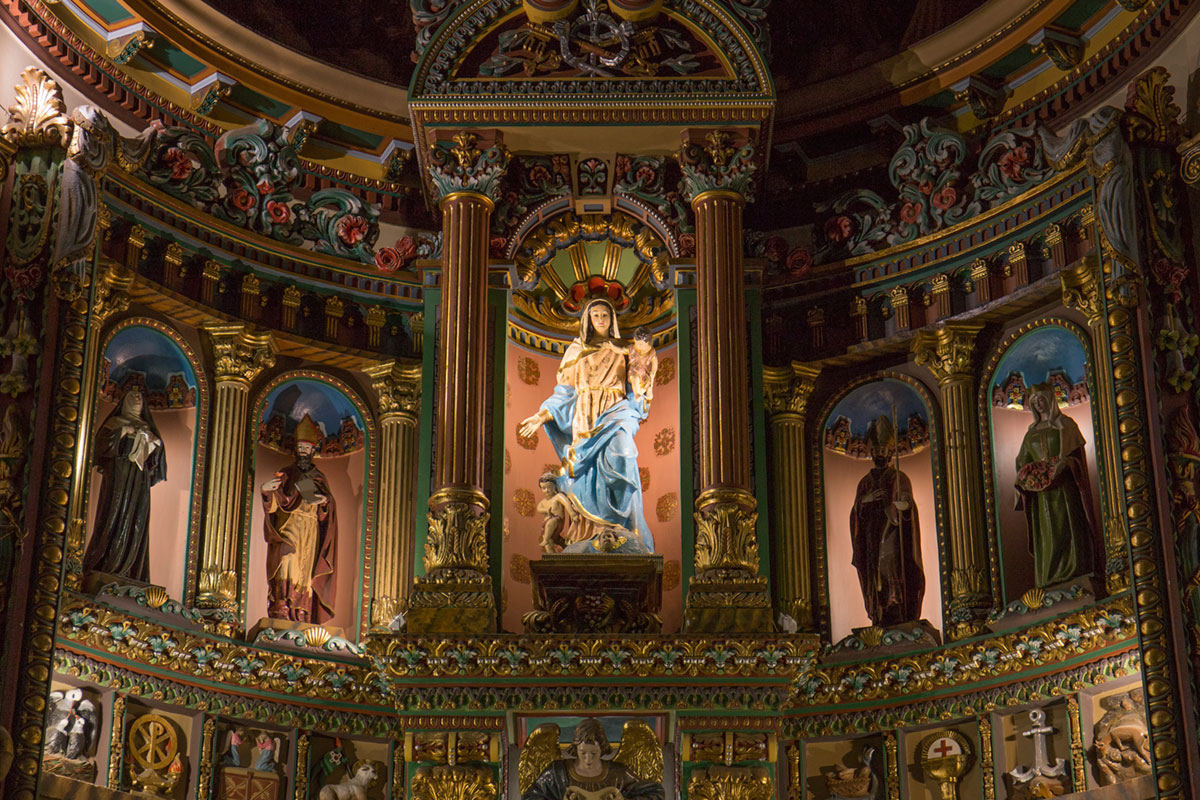 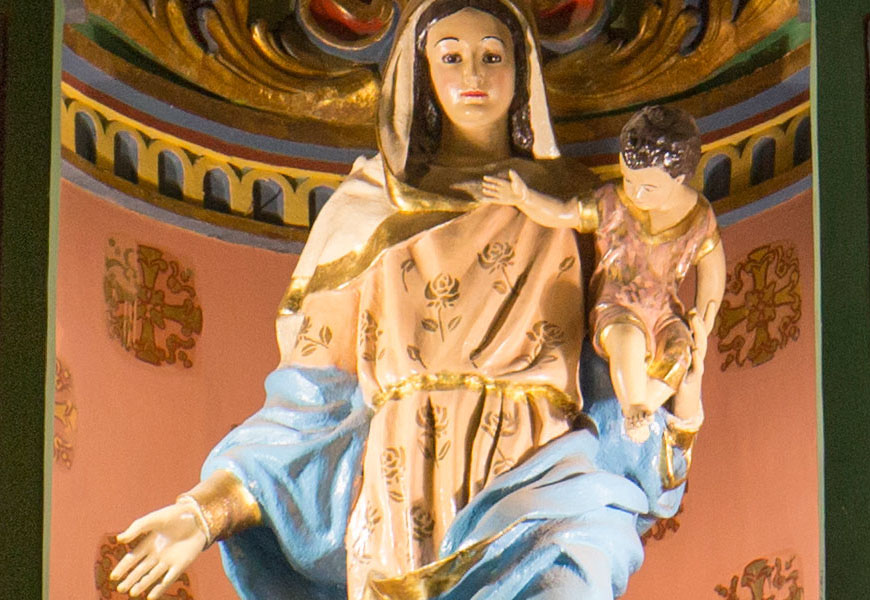 And the macro mode delivers good IQ. It can be mistaken for a real macro lens depending on the output as the files are sharp, certainly ahead of the EF 24-105mm f/4L IS USM. But the 0.7x ratio just doesn’t compare to the EF 100mm f/2.8L IS USM, that seems clearer in rendering details. The colours and bokeh are very pleasing, turning mundane objects into beautiful graphic subjects. 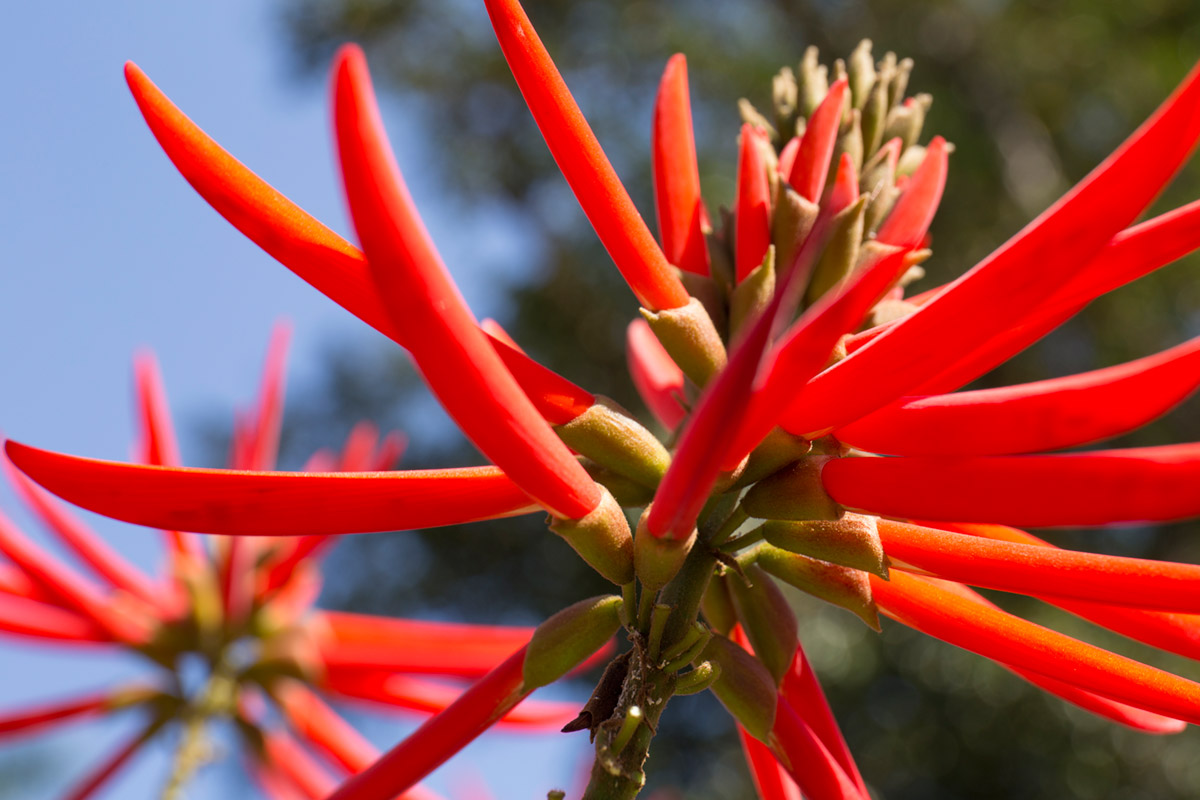 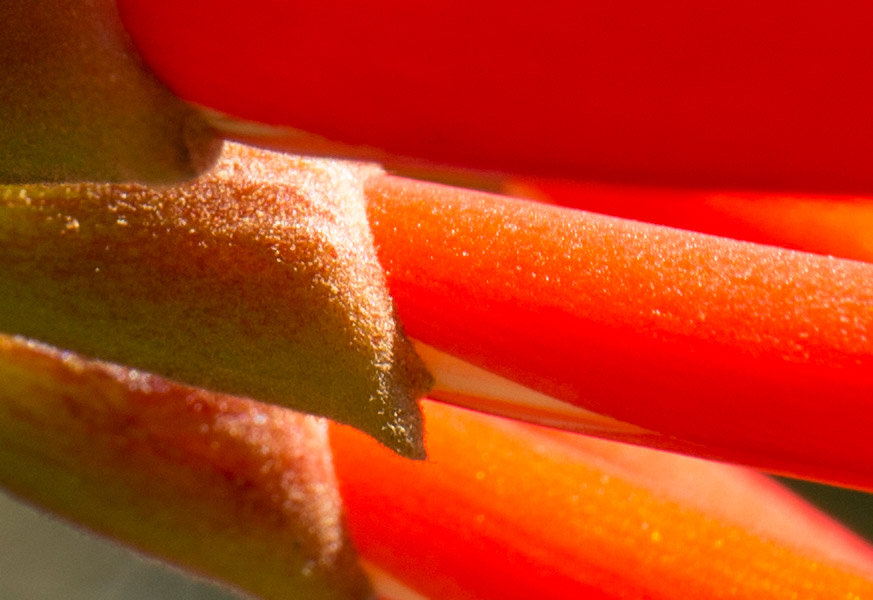 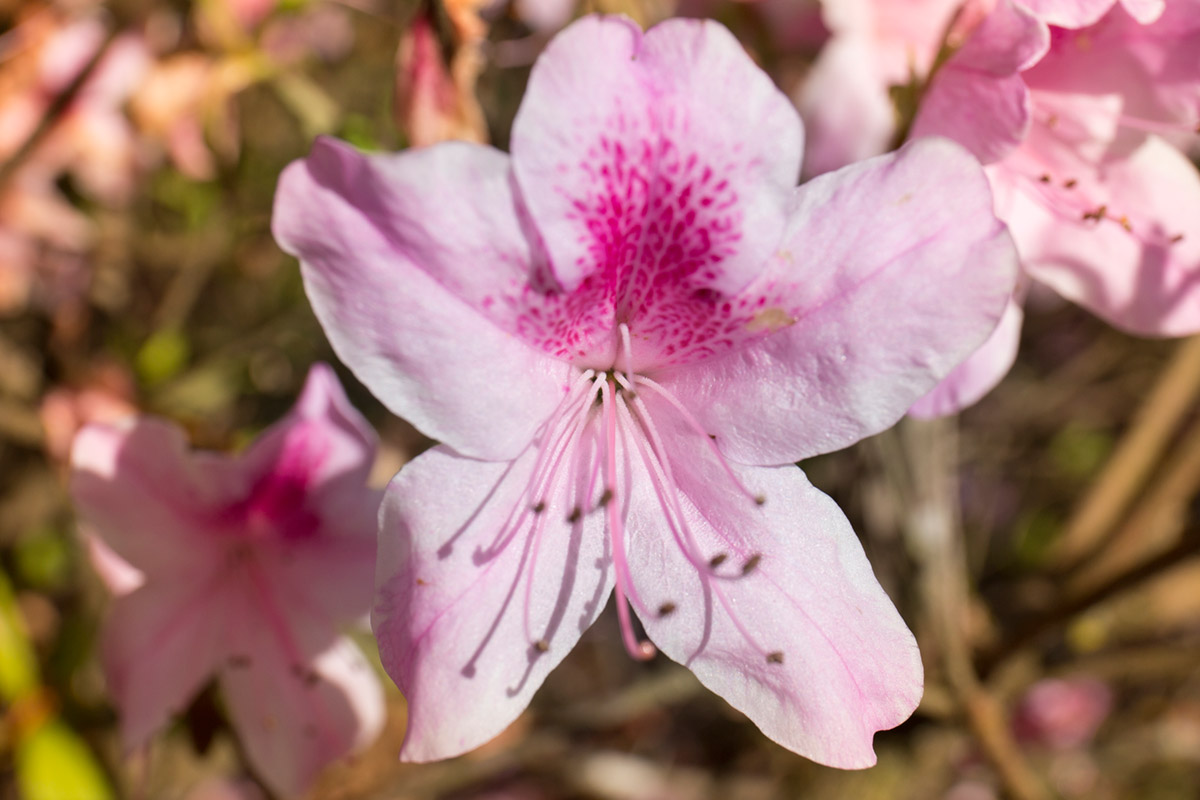 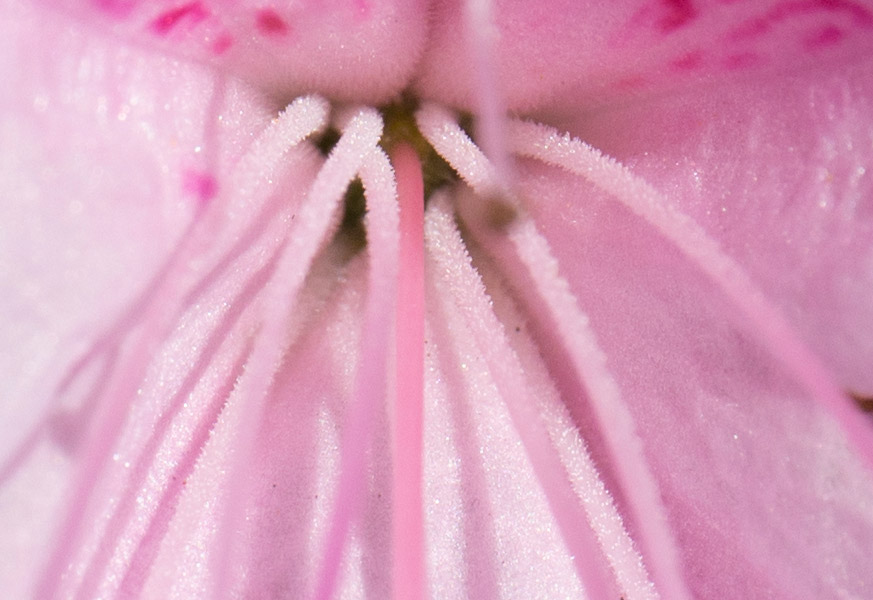 100% crop, it’s a very sharp file for a zoom lens taken to its limits. 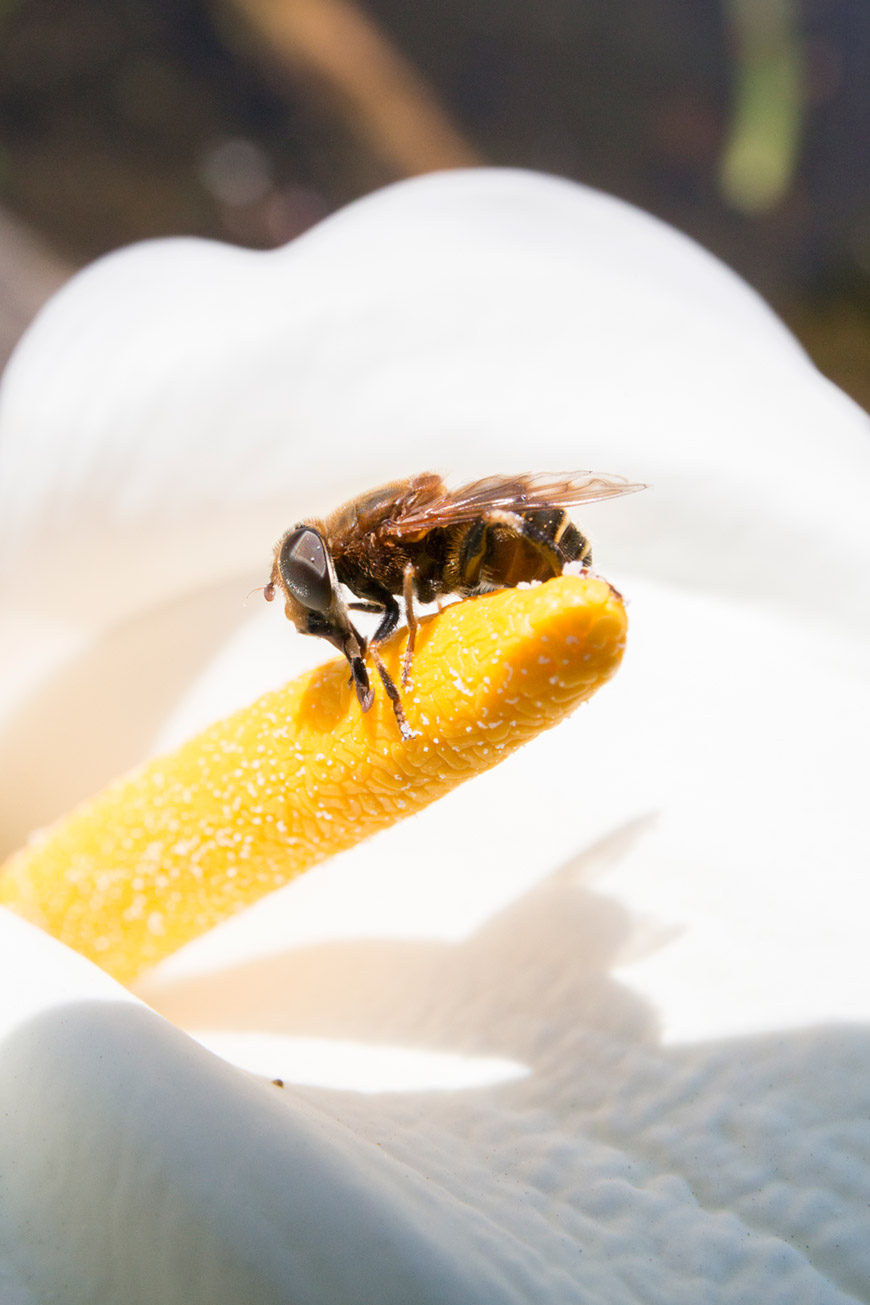 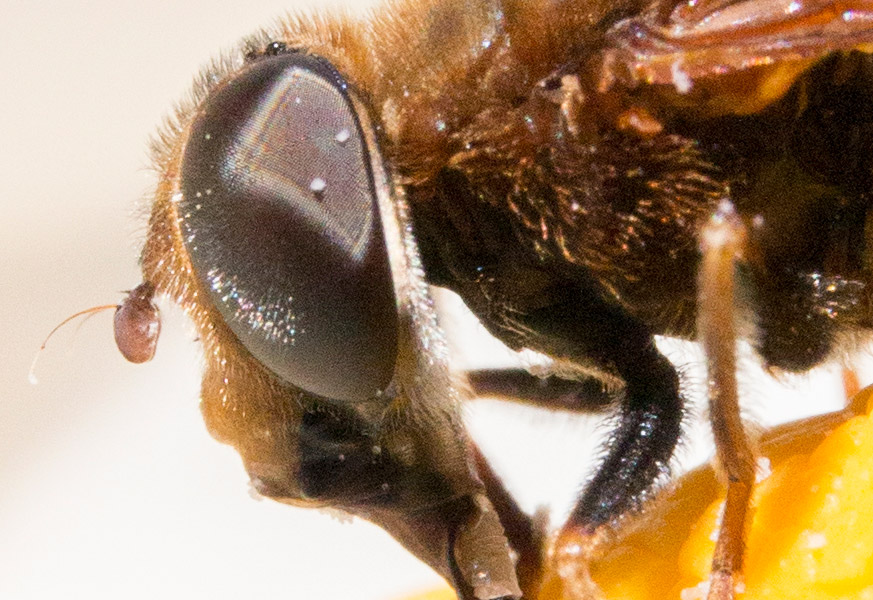 100% crop, better stop it down to lengthen the depth of field.

The EF 24-70mm f/4L IS USM is a curious piece on Canon’s lineup, especially as a L series. Those looking for a standard, top of the line zoom lens either goes for a longer reach like the 24-105mm at f/4; or the larger aperture of 24-70mm’s f/2.8, for twice the light gathering. The 24-70mm f/4 doesn’t deliver neither but remains expensive. Its price at launch was US$1499 in 2013 but quickly dropped to $999 in 2015. And as we speak, it’s under official rebate for US$200 less in B&H, for a final cost of US$799. Honestly I can only recommend to avoid it, no matter how much fun you can have with the “macro” mode. You can do the same thing adding extension tubes to your current lens. The EF 24-70mm f/4L IS USM doesn’t justify its price for the few extras. What’s the point?